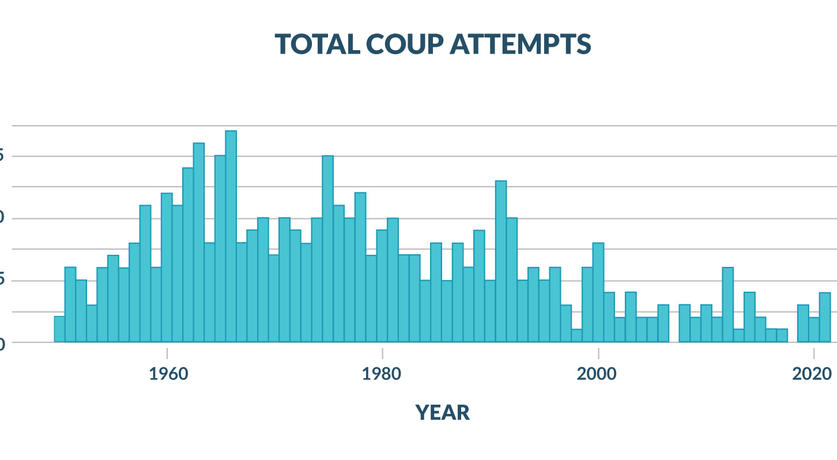 The recent presence of military coups covered in the news may lead people to believe that coups are more prevalent in 2021 than they have been in recent years, however, this perception may warrant further questions pertaining to what qualifies an event as a coup, and how loosely should the term be used? Read more:

The presence of military coups in the news over the last eight months may lead one to believe they are a common and prevalent issue. This ranges from discussions surrounding the two coups that took place in Mali within nine months of each other, to more recent dramatic events surrounding the assassination of Haitian President Jovenel Moise on July 7th.

Numerous other events have also been labeled coups of late. This includes the decision of Tunisian president Kais Saied to dissolve parliament and remove the prime minister, and the term has also been used following recent revelations of the extent of efforts undertaken by former President Donald Trump to overturn the results of the 2020 American presidential election.

All of this discussion may create the impression that coups are becoming more prevalent again, perhaps even reaching levels not seen since the height of coup activities during the Cold War. However, this warrants further scrutiny to question both 1.) what of all of these events are actually coups, and 2.) are coups actually becoming more common in light of this scrutiny.

Like many concepts in the social sciences, coups do not have a single, universally agreed upon definition and it is not uncommon to find disagreement among experts as to whether certain events are actually coups.

That being said, there are key characteristics experts typically look for when attempting to identify coup events. Stemming from Johnathan Powell and Clayton Thyne’s definition of a coup as “an overt attempt by the military or other elites within the state apparatus to unseat the sitting head of state using unconstitutional means” there are three major components:

Considering our list of recent events above, it is clear that not all of them meet these criteria and are better described as different political phenomena. For example, the recent assassination of Jovenel Moise does meet some of the criteria of a coup in that the head of state was targeted using illegal means. However, the actors carrying out these actions were not agents of the government and, perhaps more importantly, were not obviously seeking to seize power for themselves.