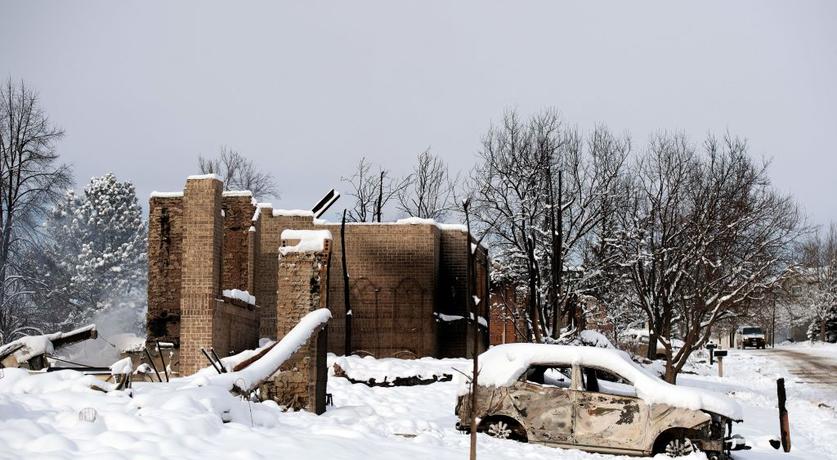 As we discussed the devastation with President Biden, Governor Polis, and our US Senators and Congressmen last week and contemplate daily the eerie vacuum of space where our homes once stood in Superior, Colorado, I wonder whether humanity can heed the warning calls of climate change.

As we discussed the devastation with President Biden, Governor Polis, and our US Senators and Congressmen last week and contemplate daily the eerie vacuum of space where our homes once stood in Superior, Colorado, I wonder whether humanity can heed the warning calls of climate change. And whether we can learn to cooperate and make decisions for the longer term.  Just as we’ve experienced in One Earth Future’s work on solving seemingly intractable problems of ongoing violence for the past decade, there are glaring realities telling us we must do more than follow the status quo of arguing, kicking the can down the road, and hoping that the next wildfire or flood or armed conflict is an isolated event and someone else’s problem.

Colorado’s Marshall Fire destroyed my community and our home of 41 years, a house built in 1894 by the son of the founder of Superior. I believe that we, in Superior and Louisville, are among the increasing number of climate change victims. We are resilient, and we will rebuild, which is a beautiful part of the American spirit.  I stand with all my neighbors in solidarity of loss and the knowledge that we will make it through this together. While we will rebuild and create new memories, we also understand that nothing can replace what so many have lost.

While the cause of the fire is still being determined, it came after the worst December drought in 87 years. Dry grass fields created the incendiary conditions for this tragedy. The reality of wildfires is expanding beyond the wilderness and suburban-wildland interface to all cities in the West. It is a reminder that climate change will ultimately spare no one. The solution depends upon collective action at the highest levels. We know that our planet is warming. We know that our populations and urban developments are growing and pushing ever closer into wildlands. Our climate is becoming more volatile, as we have seen from California to Kentucky to Virginia to Colorado.  To the north, in British Columbia, wildfires also destroyed an entire town.

Hearteningly, we saw a rapid response across all governmental sectors, first responders, and community institutions, emphasizing that we can come together in a crisis. The greater Colorado community and nation at large have poured out support for our community.

Tragic events like this and the swift response seen afterward prove that we have the capacity to come together to address the challenges we face. Yet I dream of a world where we can actively address chronic, long-term problems with the urgency and resolve we apply in responding to acute, short-term problems like this after the tragic fact. I believe we can put petty divisions and politics aside and solve the problem on its own terms.

The solution takes long-term thinking and coordinated leadership to act on systemic measures to address our climate crisis. As President Biden remarked in Louisville, “We can’t ignore the reality that these fires are being supercharged” due to climate change. And I agree with the President when he said, “the situation is a blinking code red for our nation.”

The world needs vision and leadership. Coordinated action between government, philanthropy, civil society, and the private sector has the power and the responsibility to create a better future. We must learn to work together across all sectors of societies and the dangerous political divide we face to solve the world’s hardest problems. In this case, creating a  future that prevents unnecessary fires and floods means addressing climate change now.

I appreciate President Biden and senior leadership showing up, listening, and committing to take action.  I applaud President Joe Biden and First Lady Jill Biden, along with Colorado Senators Michael Bennet and John Hickenlooper, Congressman Joe Neguse, and Governor Jared Polis, for joining my neighbors and me in Louisville to lend their support.

The wildfire was yet another warning sign, a swift and brutal reminder that climate change is here--now, right in my yard. My philanthropic work has been focused on efforts to help humanity solve big, long-term problems, problems that I used to think would be my grandchildren’s to solve. It turns out that they aren’t even my son’s to solve. They are mine.

I hope we can all rise beyond the political divide that threatens our society. I know it is possible. My hope is that it will not take more such fires and floods before enough of us wake up, own the problem and take action.