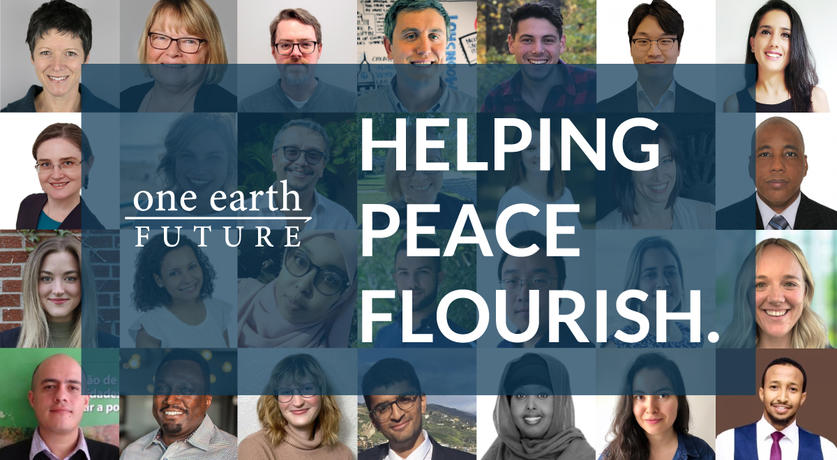 Economic opportunity in the face of conflict has been at the center of several of One Earth Future’s initiatives for peace since the organization was established more than a decade ago those that are most ripe for scaled impact this year through partnership.

The link between income and conflict risk is “one of the most robust empirical relationships in the economic literature.” This has led some of the most prominent development scholars to conclude that “the key root cause of conflict is the failure of economic development.” At the same time, we see countries like Chile and the United States where aggregate economic statistics have continued a positive trajectory even as the social fabric frays and political conflict intensifies and begins spilling into violence. This is because, as we all know, correlation is not the same thing as causation. It is also because the link between development and peace does not appear to be a neoliberal, “trickle down” mechanism where profit combines with a lack of government intervention to produce broad based social cohesion. While a rising tide may lift all boats, conflict dynamics are complicated and specific to local conditions and a one-size-fits-all model of economic development inevitably linking to peace is too simplistic. This is particularly true in areas of active conflict or post-conflict areas, where the distribution of economic benefits – which institutions get (or don’t get) resources – is important to peace.  The link between economic development and peace needs to be actively fostered through good program design, which will often involve placing people over profit. Here are four things practitioners can do to actively link economic development to peace.

1. Go to where the conflict is

In order to link economic development to peace, it is essential to go to where the conflict is. It is not enough to go to the country where conflict is taking place or even to the nearest conflict-free city. For economic activity to lead to peace, conflict actors and would-be conflict actors need to witness the economic transformation first hand, to see for themselves that the new system can meet their material and social needs. They also need to have a concrete opportunity to trade their old life for a new one. Jobs created far away from the conflict will be filled by individuals who are far away from the conflict. While it is important to ensure that interveners avoid fueling the existing conflict through their work, without geographic proximity to the communities most impacted by the struggle, economic development cannot have an acute impact on peace.

Working in proximity to a history of perpetual conflict means working in situations where free markets are largely absent and conflict economies like the drug trade, illicit mining, or the provision of ancillary services for conflict actors are alive and well. Economic actors operating in conflicted areas tend to charge very high rates, either because they feel that they are taking on more risk or because they are profiting from desperation. This means that most opportunities to link economic development to peace will come from a combination of new market creation and competing with existing products and services on lower profit margins.

For example, in rural Colombia, a group of FARC ex-combatants had joined together to form an egg business. When the Covid-19 pandemic hit, prices of all food in the region—including eggs—skyrocketed. Rather than raising their prices along with the rest of the market, the ex-combatants kept their prices fixed. Because they were using a completely local supply chain, their costs did not go up as much as their competitors, and by their estimation they were already making a comfortable living. This strategy not only generated a marked increase in sales, but it also bridged gaps across conflict lines and created significant goodwill among the general population, which has allowed the businesses to thrive in a very complex security environment.

Conflict damages formal institutions and often leads to capital flight when investors pull their funding towards safer investments. This means that traditional financing is often unavailable or expensive, and linking economic development to peace will require some creativity in this regard. In Somalia, for example, OEF’s Shuraako program has catalyzed a strong portfolio of international  impact investors by developing a methodology that utilizes traditional Somali networks to conduct accurate due diligence of businesses and create a social incentive to repay loans. In a sense, these networks perform the functions that credit scores and contract law perform here in Colorado. By largely ignoring form and creatively utilizing local systems to perform the functions investors need, Shuraako has been able to unlock millions of dollars in financing for  small and medium-sized Somali enterprises that was inaccessible before.

Blended finance mechanisms are also critical to successfully linking economic development to peace. Working in close proximity to conflict means starting more or less from scratch when it comes to bankable businesses working at scale. Whether the blend of grants and loans comes in a single package, as is the case with Bancolombia Foundation’s En Campo program, or by beginning with grant money and transitioning to market-based finance over time, the blend itself is essential for connecting economic development with peacebuilding on the ground.

The most important thing to do when working to link economic development to peace is ensure that peace remains at the center of the work. When the Colombian egg producers decided to keep their prices low, the impacts went well beyond economics. That decision, according to the leader of a neighboring cooperative, transformed everything. “It was in that moment,” he said, “that [the FARC ex-combatants] stopped being ex-combatants and became campesinos like us.” Had the ex-combatants raised their egg prices when Covid-19 hit, their profits would have been slightly higher but their impact on peace significantly diminished.

Note to Our Readers: This is the first in a three-part Incubating Peace series by OEF’s Executive Director on the three core lines of effort within One Earth Future’s peacebuilding programs around the world: economic opportunity in the face of conflict, the creative pursuit of nonviolent solutions at the highest levels of government and the use of open source data to inform them, and women’s full participation are essential for peace to flourish. In February, you’ll hear more about how we are working through our peacemaking programs. We hope to show that open source data can inform and help facilitate diplomacy amid political conflict. We aim to transform seemingly impossible through teamwork, creativity, and persistence. In March, he will share more on how we are demonstrating that the Women, Peace and Security movement provided the essential components of a feminist foreign policy.