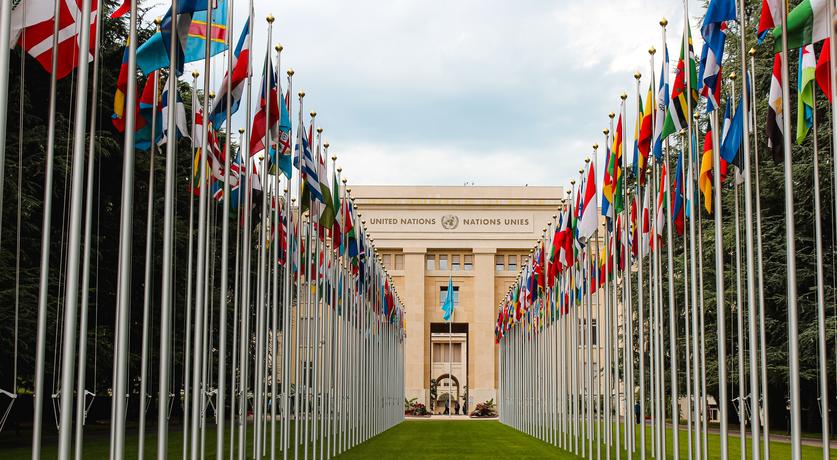 Our column this month by OEF Executive Director Jon Bellish focuses on how we are innovating through this reality with two peacemaking and negotiation programs that aim to transform seemingly impossible conflicts through teamwork, creativity, relationship-building, and the use of open-source data to inform and facilitate diplomacy amid political conflict.

With tensions mounting between the United States and China, a breakdown in US--Russia arms control, and tremendous uncertainty along the Ukrainian border, it is safe to say that great power competition has returned. That, in and of itself, would be nothing new. However, in the 30-year ebb in such competition the world became much more complex and interconnected than it had ever been before.

The interplay between great power competition and global interconnectedness creates new kinds of risks, resulting in what Mark Leonard, Director and Co-Founder of the European Council on Foreign Relations, describes as the “age of unpeace.” In this era, there are more opportunities for adversaries to undermine each other, and the ripple effects from such actions are both quicker to spread and more unpredictable.

OEF’s peacemaking strategy is built around the idea that one of the most useful things an independent outsider can do in an age of unpeace is to create off-ramps from war and make them appear attractive to key decision-makers.

Our newest program, Open Nuclear Network, does this by using open source data to reduce the risk of the inadvertent use of nuclear weapons. There are two pillars to this work. The first is an analytical team that constantly monitors conflict using the best available open source data and analytical techniques. The second is a global network of trusted experts that works to improve dialogue among world leaders and decision makers and promote nuclear de-escalation. Together, these two pillars can move parties away from the status quo of high level political dialogue backed by classified information towards one where negotiators both within and across governments can operate according to a shared version of reality.

Over the past 5 years, the Experimental Negotiation Initiative (xNI) program, has worked to develop and codify a methodology to systematically provide off-ramps to violence. Based on the work of William Ury, one of the world’s leading negotiation experts, and the three elements of the BB3 methodology, xNI help teams 1) go to the Balcony and gain perspective, 2) build a Bridge across the chasm of conflict, and 3) mobilize the Third Side, or the surrounding community, to help conflict parties find the “impossible yes.” Rather than rely on a single protagonist to engage the parties in these types of effort—in many cases an active or retired senior government official—BB3 is about enabling teams to develop and iterate strategies that can match the complexity of modern conflict.

Two relatively recent developments have facilitated OEF’s peacemaking approach focused on creating off-ramps to reduce overall risk. The first is the proliferation of high quality and relatively inexpensive open source data and tools to analyze that data. Until about a decade ago, it was simply too expensive for non-governmental organizations to produce and analyze the types of data generated by governments. This is not to say that open source capabilities match those of the top intelligence agencies, but it is nonetheless an important development in breaking down information silos to reduce risk.

The second major development has been the move away from third party mediators in peace negotiations. Conflict parties no longer want an outside party at the table, and have instead opted for “negotiation advisors,” who are politically impartial vis-a-vis the conflict, but who nonetheless support only one of the negotiating parties. William Ury and former chief British government negotiator on Northern Ireland Jonathan Powell pioneered this model in Colombia, where it was utilized with success by President Juan Manuel Santos in the Colombia Peace Accords of 2016.  xNI has continued the work of codifying methodologies for small peace advisory teams supporting heads of state, and advising such teams directly. The role of negotiation advisor creates opportunities for the third side perspective to be heard and acted upon, and it also creates the possibility of greater networked coordination among those who are trusted by the principal decision makers and are working towards peaceful outcomes.

We are entering a world that combines the interconnectedness of the turn of the 21st Century with its geopolitical climate. This combination has already proven to be challenging, and we should expect the challenges to amplify in the years to come. However, civil society around the world is innovating in areas like PeaceTech, the battle against misinformation, and peacemaking approaches. Just as a networked, interconnected world has amplified our ability to stumble into conflict, it has also created new opportunities to innovate and build off-ramps from such conflict. We must continue to invest in these kinds of innovations, since off-ramps from war are needed now more than any point in living memory.

Note to Reader: This February 2022 column by OEF’s Executive Director, Jon Bellish, is the second in a three-part 2022 series on the three core lines of effort within our peacebuilding programs around the world, all of which we believe are essential for peace to flourish: 1) economic opportunity in the face of conflict, 2) the creative pursuit of nonviolent solutions at the highest levels of government and the use of open-source data to inform them, and 3) women’s full participation. In January 2022,  Jon focused on imperatives for sustainable economic development initiatives based on lessons learned from our work over the past decade in Colombia and Somalia. In March 2022, we will share more on how we are demonstrating that the Women, Peace and Security movement provides the essential components of a feminist foreign policy.