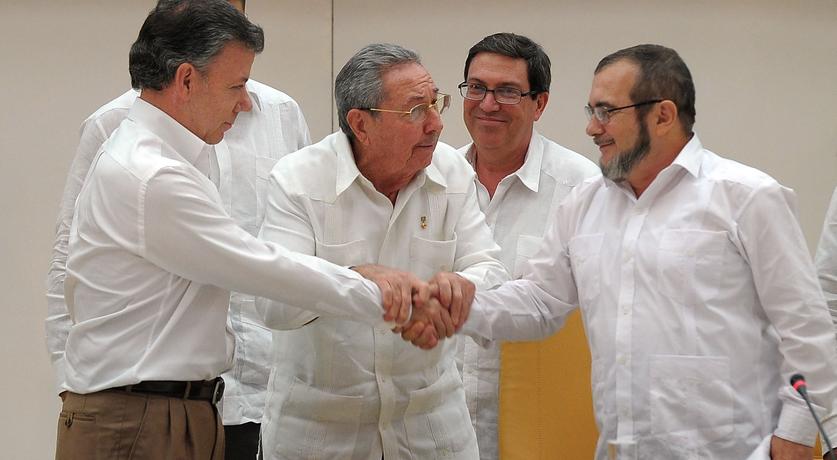 In 2015, negotiations were in full swing during the Colombian peace process. The negotiators were discussing one of the most complex issues: the delicate question of transitional justice and who would be held accountable for the thousands of war crimes. After a complete deadlock, President Juan Manuel Santos called upon his senior advisor, William Ury, to find a path forward. Read William Ury’s reflections on getting the talks “unstuck” and reaching sustainable peace through the power of the Third Side.

How can we deal with our deepest differences and address conflict both creatively and constructively? Finding answers to this question has been my life passion. And after 40 years of supporting some of the toughest negotiations in the world, I am more and more convinced that the key to mutual gain in negotiation is what I have called the Third Side.

What is the Third Side? The Third Side is the surrounding community that serves as a safe container for the conflict. It is about supporting the negotiation with resources and genuine curiosity. The Third Side can be instrumental in bringing new perspectives, processes, people and ideas to help the parties get unstuck. Anyone can be a thirdsider in a negotiation. You do not have to be a professional mediator, a diplomat or an experienced conflict practitioner.

One instance that, in my experience, illustrated the potential of the Third Side to assist in difficult negotiations was in April 2015 during the Colombian Peace Process when the Colombian government negotiators were at an internal impasse.  A terrible civil war had raged for over fifty years in Colombia, with hundreds of thousands of deaths and nine million victims. Colombian President Juan Manuel Santos had convened a small group of international peace advisors to help him figure out a way to end the war. To many observers, this seemed like mission impossible.
In 2015 the conversations were in full swing in Havana, Cuba. The negotiators were discussing one of the most complex issues: the delicate question of transitional justice. Who would be held accountable for the thousands of war crimes so that the country could heal and move forward?
At this point, an internal conflict erupted among the Colombian government team.

Almost everyone on the delegation wanted to propose language consistent with international Human Rights law, saying there would be a truth commission and collective accountability for the actors involved in the conflict. However, one key negotiator, a retired general and former head of the Colombian Armed Forces, dug in his heels and insisted the proposed language be removed. The government team was at a complete deadlock.

A whole month went by with the negotiations frozen in Havana. To make matters worse, the general withdrew from the talks and flew back home to Bogotá, an action that made the headlines in Colombia´s newspapers. The political clock was ticking, and the peace process was at risk. If there was no support of the armed forces, it was very unlikely the public would support a final peace agreement. The work of five years negotiating was about to be for naught as the process teetered on failure.

I received a call from President Santos, asking me to fly immediately to help his negotiation team get unstuck. I packed my bags.

When I arrived in Bogotá, I talked first with my friend the Peace Commissioner, who seemed highly agitated:

“We have tried everything to explain to the General why this language about transitional justice is absolutely necessary. We’d be the laughingstock of the world if we don’t accept the idea of collective responsibility. But the General is being extremely stubborn and unreasonable. No matter what we say, he will not listen to us. We are all incredibly frustrated. If the President sides with the General, it is clear that I and others will have to resign.”

After listening to the Peace Commissioner, I then had a meeting with the General. He was a very upright and highly respected military leader whom I had gotten to know a bit over the years. I asked him:

“Mi General, please explain to me what your concern is, so I can truly understand it.”

To what he said:

“It is very simple. The language specifies the collective responsibility of institutional actors, and I know ‘institutional actors’ is just a code name for the army. We in the military have talked to our colleagues in El Salvador and Guatemala, and we know exactly what happens in these situations. The politicians get off with no repercussions, and the guerillas also get off free, while the military are used as scapegoats. We will be tied up in endless lawsuits, and some of us will end up in jail.  It is grossly unfair and dishonorable. I will resign rather than accept this language.”

I listened as a thirdsider as he explained exactly what his interests and concerns were.

Finally, I met with the chief of the delegation, a former vice president and a distinguished lawyer. He explained patiently why they had to have the language in the agreement.

The interests were now much clearer to me. So I asked the whole delegation to come together for a meeting. I had asked beforehand for a secret weapon– a whiteboard– so the entire team could visualize the problem. I thanked everyone for coming and then went up to the board and wrote the sentence that was causing so much trouble: “collective responsibility for institutional actors.”

I asked the General to explain his concerns first.

“It’s clear. “Institutional actors” is just a code name for the army.”

Then I asked the Chief Negotiator if there was a real need to have a collective responsibility in the agreement. To what he replied:

"Absolutely! “The word “collective” is important because it wasn’t merely individuals who committed the human rights violations, but collective entities with collective responsibility.”

I reflected for a moment, and then I turned to the General and asked him:

“Am I correct that for you, the word institutional means the army? What if we replaced that word with another word that doesn’t point right at the army but clarifies that the whole government, including all the political leaders and ministers, are collectively responsible?  What if, for example, we used the phrase “STATE ACTORS”? What if we changed that one word?

The General stared at me without saying a word, and then he finally said:

“Well, if the word “State” doesn't single out the army but includes all the decision-makers and the governmental actors involved, I guess that would be okay.”

I asked everyone else in the room if that phrasing was acceptable. One by one, they all agreed. Everyone looked around in shock. They realized that they had solved the problem that had paralyzed the negotiations for well over two months in twenty minutes.
We all trooped over to the presidential palace to see President Santos and reported the news. He promptly approved the language and dispatched the negotiators back to Havana. With this big obstacle removed, the two sides went on to negotiate and reach an agreement on the issue of transitional justice and eventually reached a peace agreement a year later.

Here is the point: everyone in the room was super intelligent and committed to finding a resolution in the peace negotiation but it was all too easy for them, as it would be for any of us, to get stuck in entrenched positions, in emotional reactions of fear and anger, and then fall into destructive fighting.
That is why it can be so valuable to have an outsider. Someone who can serve as a balcony. Someone who can help the parties zoom into their real interests and look beyond positions. Someone who can just ask simple, innocent questions to get unstuck. That is the power of the Third Side.

Learn more about the Experimental Negotiation Initiative (xNI) at www.xniforpeace.org.