Heatmap displaying incidents of maritime piracy and armed robbery at sea over the last decade.

What OEF teams have helped experts learn about countering piracy in the last decade.

In 2019 alone, more than 4,000 seafarers around the world were exposed to piracy and armed robbery, in at least 280 incidents. Over the past decade, the human cost has been tremendous, with seafarers exposed to violence, hijackings, kidnapping, and death at the hands of pirates. Seafarers who survive this trauma and their families often suffer long-lasting effects, including PTSD.

The release of The State of Maritime Piracy 2019 marks the 10th year that One Earth Future has assessed the human cost of piracy. Understanding and creating tools to aid in combating maritime piracy has been a central piece of One Earth Future’s work for the past decade. Our goal throughout has remained to shed light on and quantify the magnitude of these crimes and the profound impact piracy and armed robbery of ships have had on stakeholders and, most importantly, its victims. 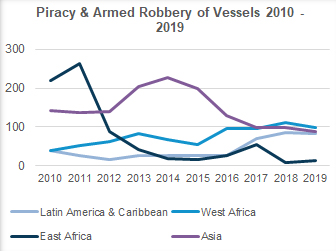 Over the last decade, the report has evolved from initially covering piracy off the coast of Somalia, to the Gulf of Guinea, Southeast Asia and finally, Latin America and the Caribbean. Trends in piracy have shifted during this time: the most notable being the reductions off the Somali coast, the rise of the Gulf of Guinea as the world’s piracy hotspot, the steady threats of kidnapping in the Sulu Sea and robbery of ships in the Straits of Malacca and Singapore, and the upward trend in armed robbery of fishing vessels and yachts in Latin America and the Caribbean.

What have we learned over the last decade of counter-piracy operations, and what needs to happen in the ten years to come in order to maintain progress?

Panelists agreed on the importance of a naval presence off the Horn of Africa and the Western Indian Ocean, coupled with well-aligned national and regional efforts via inter-agency coordination and information sharing. Also crucial to counterpiracy has been cooperation and building trust with partners, especially the shipping industry. Prosecution of piracy-related crimes was also highlighted as a critical component in the efforts to combat piracy.

Panelists also emphasized that piracy and armed robbery at sea are different in each region. Approaches that were successful in one region cannot simply be transposed to another, but determining best practices and common benchmarks has been beneficial.

Piracy and armed robbery at sea actors are also extremely adaptive and opportunistic in each region. The threat is constantly evolving, especially as it intersects with other maritime issues and insecurity on land. Counterpiracy efforts moving forward will thus require continued tracking, holistic approaches, and a continued commitment from all stakeholders to training, exercises, policy development and collaboration.

In the ten years since One Earth Future’s Oceans Beyond Piracy program released its first Economic Cost of Piracy analysis, the global counterpiracy landscape has changed dramatically, and One Earth Future is proud to have played a role. The State of Piracy report series, initially focused exclusively on the economic impacts of Somali piracy, grew to become an analysis of both the economic and, importantly, human impacts of piracy and armed robbery. As a result of the expanded analysis on the human impacts on seafarers and their families, One Earth Future, through Oceans Beyond Piracy and along with the Teekay Foundation, initiated the 2011 Declaration Condemning Acts of Violence against Seafarers (aka “The Washington Declaration”) in which some of the world’s largest flag states agreed to supply piracy incident data to the International Maritime Bureau for collation, anonymization, and distribution in an attempt to better understand the abuse to which seafarers are subjected by pirates. One Earth Future also supported the victims of piracy through the Hostage Support Partnership, which provides humanitarian support and helps to free long-term pirate hostages from captivity. The Hostage Support Partnership was instrumental in securing the October 2016 release of 26 crewmembers of FV Naham-3, which was captured in the western Indian Ocean in 2012.

Through the work of first the Oceans Beyond Piracy program, and now the Stable Seas program, and with the backing of the UNODC’s Global Maritime Crime Programme, OEF has remained committed to providing analysis and tools to understand the myriad threats facing the maritime domain, and ultimately, to end violence at sea.

Read the Full Report and Watch the Launch Event.