North Korea’s rapid development of missile capabilities has prioritized technological advancement, range, and payload delivery in order to achieve Kim Jong Un’s goal of delivering a nuclear weapon to the US mainland. Being able to nuke the continental US isn’t just to live up to the hype of the propaganda, but because it’s a very effective wedge between the US and its ally South Korea. North Korea is counting on an already strained relationship unraveling totally. The removal of US troops from South Korea and Japan are among the security guarantees it most greatly desires. To this end, North Korea has tested two types of intercontinental ballistic missile (ICBM) known as the Hwasong-14 and Hwasong-15.

Closer to home, North Korea has focused on solid-fuel technology and maneuverable warheads, with recent launches of the KN-23. While it is unlikely that North Korea has already developed a nuclear warhead for this size of missile, the missile is nuclear-capable due to its similarity to other nuclear-capable missiles. Should North Korea develop a small enough warhead, this missile will be considered still more dangerous.

After spending much political, technical, and financial capital on these technologies, North Korea is invested in countering any move by the US or its allies in the region when it comes to ballistic missile defence.

Missiles are divided loosely into categories based on their flight, range, and fuel-type. Ballistic missiles follow a ballistic trajectory which is determined during their powered flight. Just like a gun shooting a bullet, the path of the bullet, the speed it will fly, and how far it will go is determined by its initial propulsion. Cruise missiles, on the other hand, fly under power throughout the majority of their flight meaning they can change direction and even speed.

North Korea’s missiles can be further divided by their range. ICBMs are classified as missiles with a range of over 5,500km and North Korea tested two types thus far, though other untested mock-ups surfaced in the years leading up to the testing of the Hwasong-14 and Hwasong-15 in 2017. Both missiles were tested at lofted trajectories meaning they launched at a high angle shooting to altitude beyond even the orbit of the International Space Station, though landing relatively near North Korea’s shores. If these same missiles were launched at a minimum energy range, they would reach the US mainland which flying at a lower altitude.

What is ballistic missile defence?

For every state that develops a missile there are several who want to protect against it. There are an abundance of approaches, but one of the most controversial is ballistic missile defence (BMD). The general idea of ballistic missile defence is to detect an incoming warhead and neutralize it before it hits you. This simple concept is easy to sell to the general public who obviously want to be protected from incoming missiles.

When considering an incoming ICBM from North Korea, the US has a sophisticated system of space and ground-based sensors and ground-based interceptors. Space-based sensors detect the heat-signature of a missile launch almost immediately. Because these sensors orbit the earth, they have an excellent vantage point compared to ground-based sensors which cannot “see” over the curve of the earth. The missile is tracked throughout its powered flight or “boost phase.” Once the trajectory and other signatures of the missile are calculated, an interceptor missile with a payload of “kill vehicle” is launched from Vandenberg Airforce Base or Fort Greely Alaska. Each engine of the interceptor fires in succession until it finishes its own “boost phase” and the kill vehicle is guided to intercept the nuclear warhead during the “midcourse phase.” 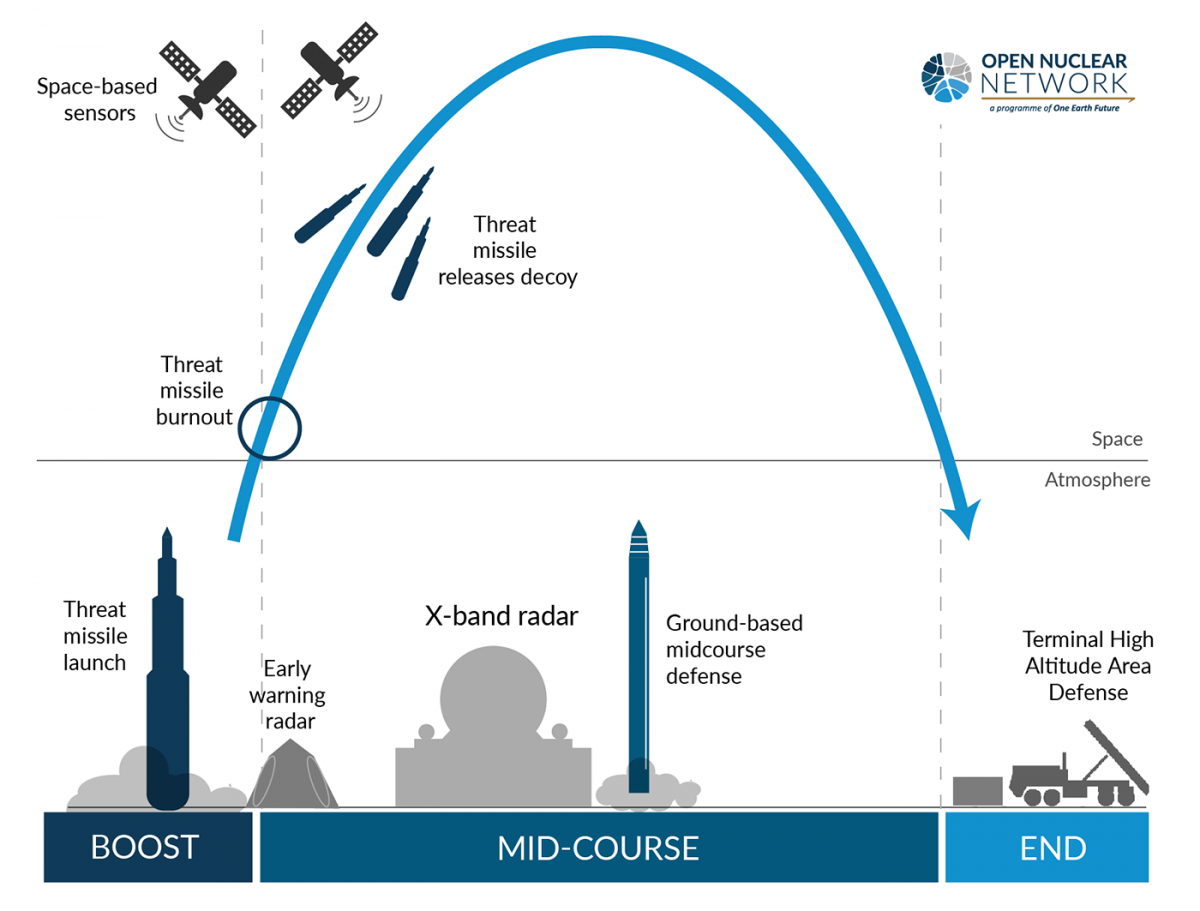 The challenge is the complex execution and the cost of intercepting all missiles, over all territory, all the time, without any mistakes. Regardless of what politicians may promise or the public may want, this is not in the design or testing specifications of any existing ballistic missile defence projects. BMD is designed only for the narrow conception of a specific problem. Even then, it is not always effective.

In fact, it is cheaper and easier for the threatening state to develop more missiles, more warheads, decoys that confuse sensors, missiles with unusual or maneuverable flight paths, or unusual launch practices than it is for any defence system to account for it. So as ballistic missile defence systems get more complicated, and thus missiles get more numerous and/or complicated, BMD itself must evolve in an ever more expensive and difficult loop. This loop is not sustainable.