Every state that has developed intercontinental ballistic missiles has considered how to deliver a nuclear payload to its target without interference. Generally, states counter ballistic missile defence (BMD) by increasing the number of missiles they produce, developing countermeasures and penetration aides such as decoys or chaff — which confuse BMD sensors, or increasing the number of warheads in each missile’s payload.

States also increase survivability of their land-based missiles by making them road-mobile, hiding evidence of an imminent launch, and reducing the time it takes to launch a missile to avoid preemptive strikes or other “left of launch” strategies. Still more advanced, states may seek to maneuver a warhead or launch missiles at a depressed trajectory difficult for ground-based radar to capture. North Korea is no exception.

Monitoring countermeasure development is extremely difficult. The development of chaff, balloons, and other penetration aids can be done in warehouses much like any other large industrial facility. Most of what is available in the open-source about countermeasures is from personal accounts and unclassified or declassified documents from other states that either attempted to develop countermeasures or account for them in their own ballistic missile defence systems. Scientific papers and activities in a country’s space program can also give some hints.

The US’s interest in penetration aids dates back to the 1950s when the Soviet Union began testing anti ballistic missiles. Through the 1960s, the US funded two dozen approaches including chaff, decoys, and electronic measures. It is still possible to see various US decoy patents in patent databases! 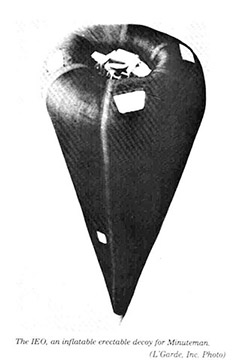 One example is an inflatable decoy for the Minuteman III. Since X-band radar detects dimensions and shape, these inflatable and reflective balloons can disguise which has the true warhead(s) from those which are empty. This requires many more kill-vehicles to intercept targets.

Similarly, the United Kingdom’s Chevaline project investigated penaids and decoys to counter Soviet anti ballistic missile systems. However, the 1978 Duff-Mason Report found that Chevaline penaids were primarily effective outside the atmosphere (exoatmosphere), and also estimated that the Soviet Union would have the capability to counter incoming warheads in their terminal phase in the latter half of the 1980s. Both the US and the UK eventually decided that producing multiple independent reentry vehicles (MIRVs) was preferable to decoys.

With the introduction of space-based heat sensors, BMD systems began sensing not just the shape and size of an object, but it’s temperature difference from the environment. To this end, countermeasures including heating decoys and/or cooling warheads entered the discussion.

China also investigated countermeasures and MIRVing their ICBMs, according to US intelligence. The 1995 Ballistic Missile Defense Organization country profile on China suggests that China could produce an “ICBM warhead with electronic countermeasures and light exoatmospheric decoys” as well as radar absorbent materials. It also asserts that the lift capacity of China’s DF-5 ICBM made it possible to handle the weight of three warheads, but that there was a space constraint limiting it to two. By May 2015, the US Department of Defense asserted that China had MIRVed its DF-5 for the first time, and by September of the same year, China unveiled the DF-5B with multiple warheads at its 70th anniversary parade for Victory Day.

The US, Russia, UK, France, and China eventually decided to move to multiple independent reentry vehicles. These decisions were primarily driven by their ability to lift the weight and volume of multiple warheads, which are bigger and heavier than decoys. In some cases, missiles were designed before the idea of MIRVing was anticipated. For North Korea, the concepts of countermeasures, MIRVs, and ballistic missile defence have been long-established. It is much easier for North Korea to design for these factors from the beginning.