Almost everyone agrees that genocide, mass atrocities, and war crimes are by definition things that shouldn’t exist in the modern world.  Despite that fact, every new atrocity comes with extensive debate and discussion over what steps should be taken, and by whom, to help stop these attacks.  The adoption of the “Responsibility to Protect” (RtoP) by the UN General Assembly marked what many people hoped would be a turning point in support for international action to stop mass atrocity crimes. In fact the UN did briefly support more aggressive actions to stop abuses: UNSC Resolution 1973, which authorized the use of force in Libya in 2011, became the first resolution to authorize military force without the approval of the state government.  Despite the hopes of RtoP supporters, however, the response to 1973 and to the development of RtoP in general was increased push-back from those countries concerned about the over-use of military intervention and politically-motivated regime change.

One complaint that has been lodged against RtoP and global pressures against mass atrocity crimes is that some countries use these arguments as cats’ paws to accomplish their larger national security goals. I would argue that these criticisms are in part fed by another issue - one that OEF has identified with RtoP as it’s currently discussed: the focus almost purely on state actors.  In the kinds of messy, complex conflicts that characterize most violations of RtoP in the modern world, a focus only on states misses some of the key actors involved in the conflict.  Most conflict today happens at the sub-state level, and involves non-state actors. They are frequently both combatants and targets of attack.  This means that non-state institutions, civil society, and the private sector are present in modern conflict and atrocities in a way they historically haven’t been seen to be.  These groups have significant capacity: they have expertise, local knowledge, and resources that can be brought to bear to address the crimes covered under RtoP. 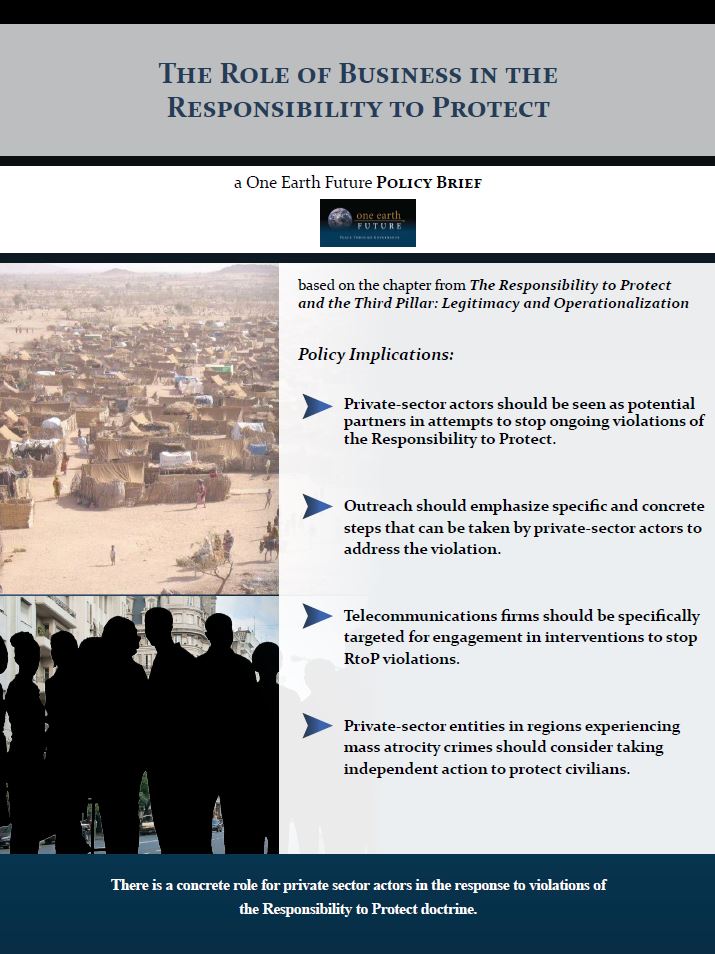 OEF’s work in Kenya has demonstrated the role of private industry in peacebuilding and conflict prevention.  A new chapter by me and Eamon Aloyo, and an associated policy brief develops a related argument. This is that the private sector may have both a role and an interest in participating in third-pillar actions taken to stop ongoing abuses.  Active participation can take several forms.  One of these is direct protection of staff and facilities, such as Unilever was able to provide in Kenya during the 2008 post-election violence.  A more engaged role can place private sector actors as active supporters of peace processes, or as actors that have pledged to stop abuses.

For example, in Lybia, oil companies had to choose between buying oil from areas held by rebels and avoiding this market.  This decision had direct impact on the development of mass atrocities: the oil was used to fund rebel activities to oust the government accused of crimes against humanity.  Alternately, rebel groups who themselves are the primary drivers pushing mass atrocities could sell oil, and the same decision to buy oil from these non-state actors would have a different impact.  There’s also good evidence that private companies and business leaders can play a role in negotiations to peacefully resolve conflict: as neutral third-parties, they can play an intermediary’s role that other organizations may not be able to.

I wouldn’t claim that private sector actors have demonstrated that they can unilaterally change the course of ongoing atrocities the way that international intervention can.  But I do argue in this chapter that private sector actors have demonstrated they can impact atrocities, and that they should be considered as partners in third-pillar interventions.  With some effort, it’s possible that this might help change the discourse around RtoP: if the states and global institutions that promote RtoP have a wider toolkit for countering ongoing atrocities, perhaps the perception of RtoP as inherently attached to military intervention can be done away with.