Is the world getting more peaceful? A brief overview of relevant research

This blog post briefly reviews the current state of research on armed conflict, discusses the predictors of peace, and addresses the opportunities for One Earth Future, which is dedicated to leading the initiatives that aim to improve systems that prevent and stop armed conflict. 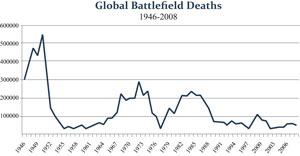 Is the world getting more peaceful?

The short answer to this question is yes. Recent research has consistently shown trends toward fewer and less lethal wars over time. This trend is most visible when looking at interstate conflict in the 20th century, which has decreased dramatically since the late 1940s. The story for intrastate conflict, such as rebellions and insurgencies, is more complicated: The number of such conflicts in the world today is higher than at the turn of the century, although not as high as it was during the Cold War. Despite the increased intrastate conflict over the same time period, the number of battlefield deaths per year has been trending downward over time (see left). Steven Pinker has argued that more than this, over the past 10,000 years of recorded human history the trend has been towards a more and more peaceful world when considering all forms of violence rather than just war – a claim supported by other researchers. 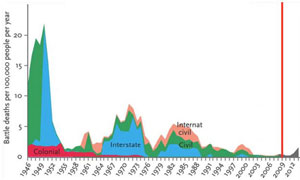 What about current wars and apparent increase of violence recently?

The decline in conflict throughout the 20th Century highlights an important opportunity for those engaged in issues of global governance. Through our initiatives, One Earth Future Foundation seeks to further support the continuation of positive global trends and provide active operational, research, and strategic support to creating constructive alternatives to violent conflict.