State media of the Democratic People’s Republic of Korea (DPRK) reported on 12 January 2022 that the Academy of Defence Science had tested a hypersonic missile on 11 January 2022. [1] This is the first missile launch in which DPRK leader Kim Jong Un has been officially confirmed as having been present since 21 May 2020. [2] Below is a preliminary analysis based on available information.

According to photos released by the DPRK, the hypersonic glide vehicles (HGV) (i.e. the re-entry vehicles) of the prototype hypersonic missiles that were tested on 5 and 11 January 2022 are of the same design. However, the design of the recently tested HGVs is different from that of the Hwasong-8 hypersonic missile that was tested on 28 September 2021, as can be seen in Figure 1 below. 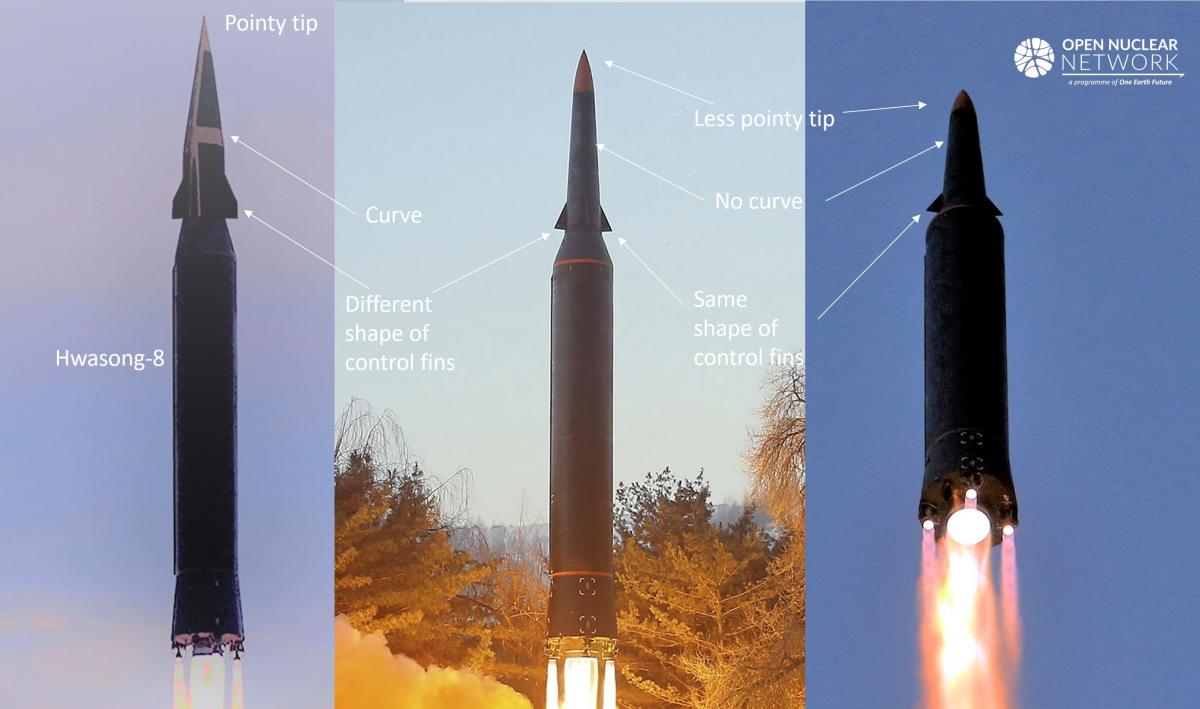 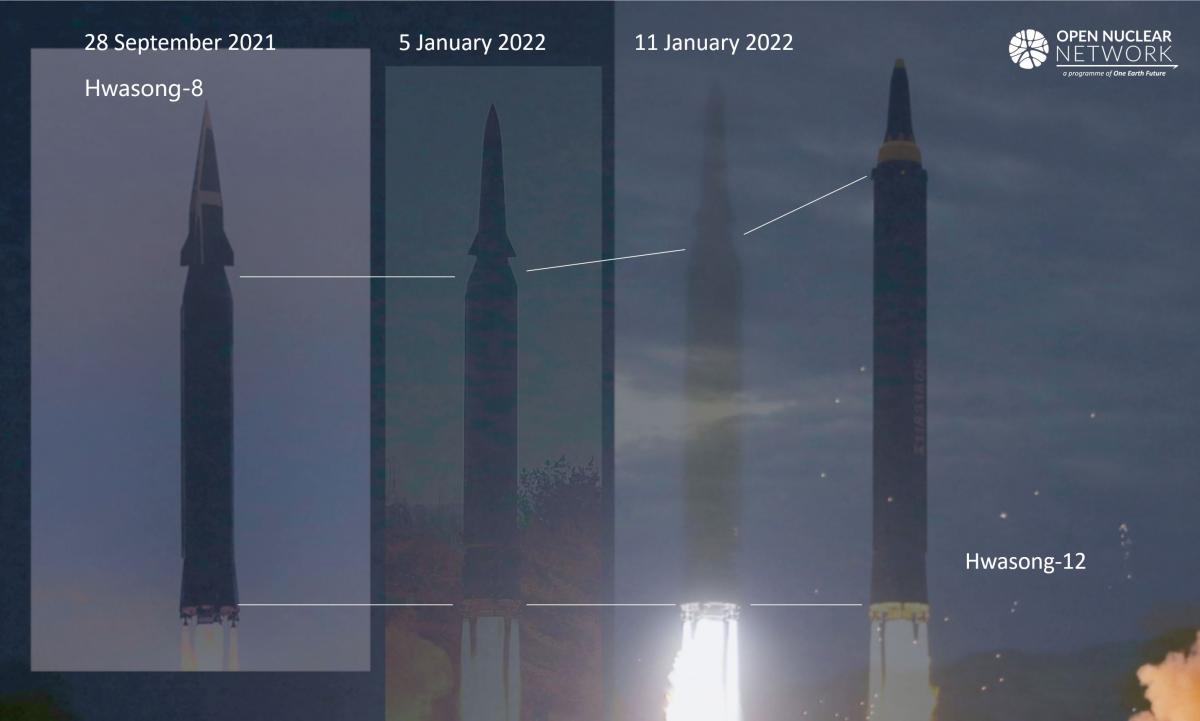 According to the Joint Chiefs of Staff (JCS) of the Republic of Korea (ROK), the missile tested on 11 January 2022 “flew more than 700 km at a maximum altitude of 60 km and at a top speed of Mach 10.” [3] According to KCNA, after separation from the rocket stage, the HGV “made glide jump flight from 600 km area before making a 240 km-long turning maneuver from the initial launch azimuth to the target azimuth and hitting the set target in waters 1 000 km away.” [4] One of the flight path maps released by KCNA is shown in Figure 3 below.

Another map (Figure 4), indicated by KCNA as having been shown to Kim Jong Un, illustrates the movement of the HGV on the vertical plane (upper blue line) and the horizontal plane (lower blue line). The red line (inserted by ONN) shows the approximate distance between the firing position and the point of impact. The green line (also inserted by ONN) illustrates what KCNA describes as the “240 km-long turning maneuver from the initial launch azimuth to the target azimuth.”[5] 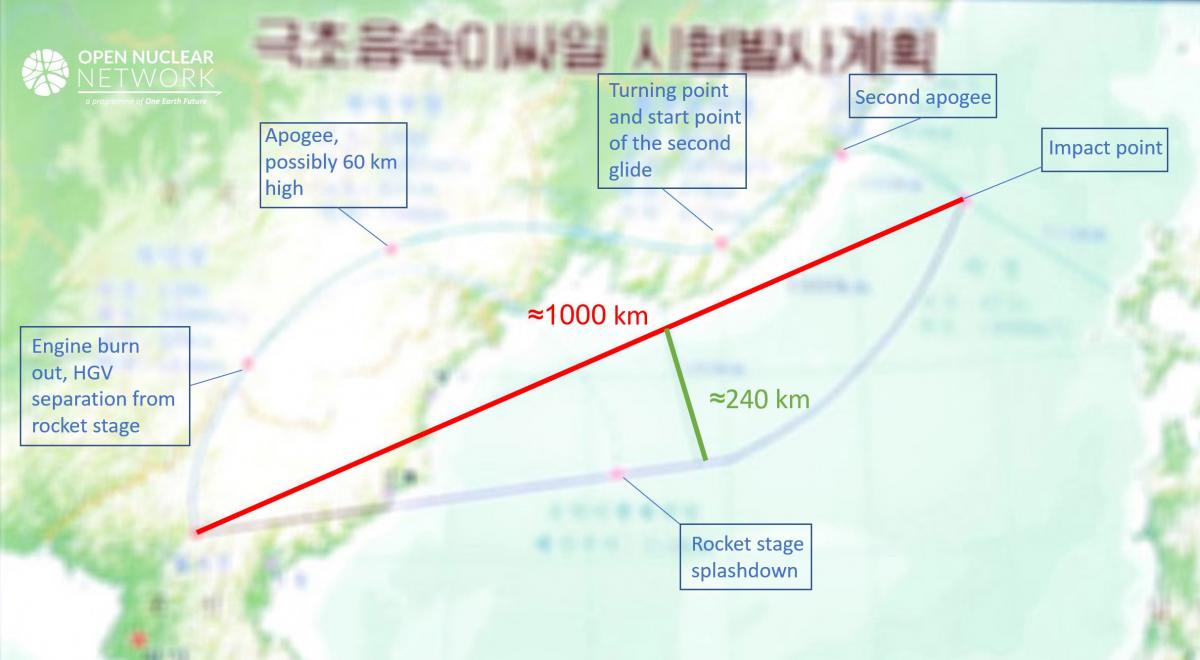 The flight path revealed by KCNA is supported by the map released on 11 January by the Japanese Ministry of Defense (MoD) (Figure 5). The possible splashdown zone of the HGV clearly suggests that the HGV deviated from its initial flight direction and maneuvered further north.

The Japanese MoD also stated that, if the missile followed a normal ballistic arc, it would fly less than 700 km. [7] This is consistent with KCNA’s statement that the HGV first flew 600 km before performing the turning maneuver. [8]

There is no official or universally accepted definition for the term “hypersonic missile”. However, the term is normally used to refer to missiles that travel at speeds of Mach 5 or above, include low altitude employment and maneuver during flight. [9] On that basis, and taken together with the information available from the DPRK, the ROK and Japan, it is clear that the DPRK tested a hypersonic missile since: (1) the missile reportedly reached a top speed of Mach 10; (2) its entire flight was maintained within the atmosphere; and (3) the HGV conducted at least one maneuver that deviated from its initial flight direction.

The differences between the maps released by the DPRK and Japan, and the differences in flight distance reported by the ROK and the DPRK, demonstrate the potential difficulties and uncertainties in detecting and tracking HGVs.

In ONN’s brief on the 5 January 2022 hypersonic missile test, [10] it was estimated that the HGV might have not reached its full range. It was also noted that it was not immediately clear what the intended targets were. Information about the flight path and speed of the 11 January 2022 missile offers some better insight in that regard.

As can be seen in Figure 6, the smaller red circle represents the potential target area using a 1000 km radius (based on the distance from the point of launch to the target as declared by the DPRK), The yellow circle reflects a radius based on the actual distance (close to 1100 km) flown taking into account the turning maneuvers reported by the DPRK. For the purposes of comparison, the larger red circle represents the nominal range of a Hwasong-7 ballistic missile, [11] which remains the backbone of the regional nuclear strike force of the DPRK. 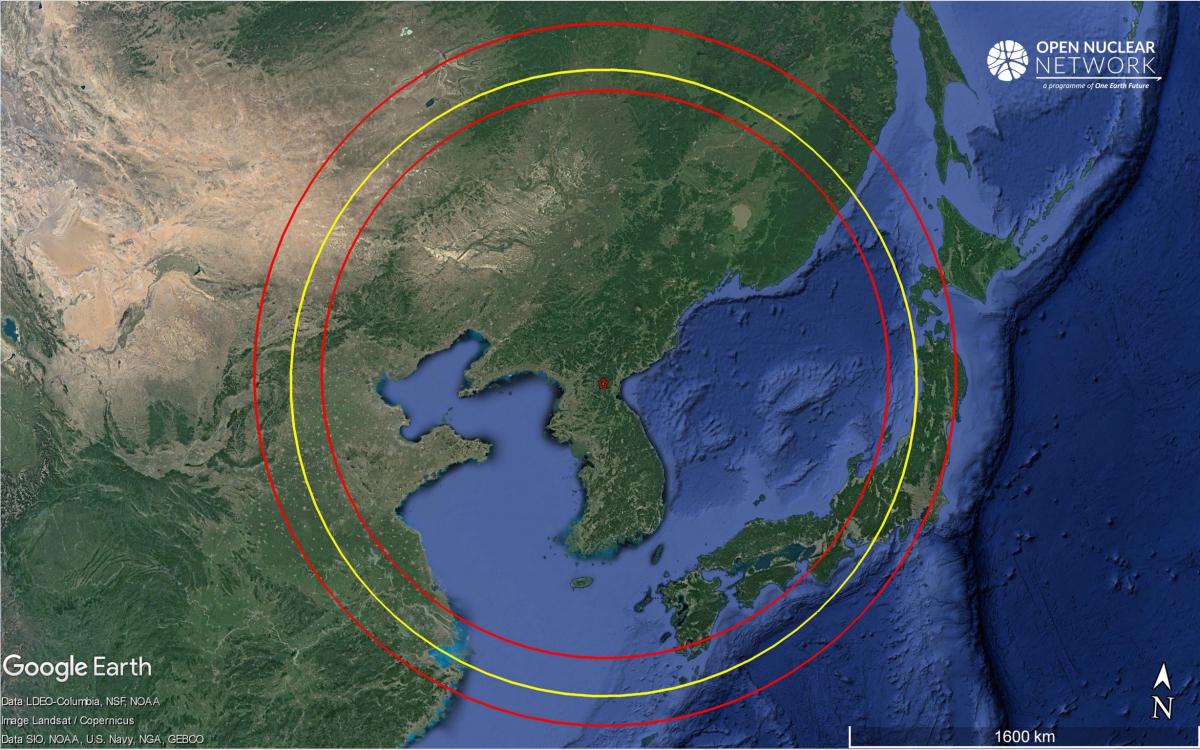 Figure 6: Comparison of flight ranges from a location in the DPRK. Image: Google Earth

In ballistic missile tests, the DPRK often uses highly lofted trajectories, which enable ballistic missiles to reach the desired speed while preventing them from overflying other countries. The turning maneuver seems to have served similar purposes in the testing of HGVs.

As the actual distance flown by the HGV was achieved with significant loss in speed and/or altitude caused by the turning maneuver, [12] its maximum flight range without a turning maneuver could be at least on par with that of the Hwasong-7 and possibly beyond. Thus, the DPRK might be planning to use this hypersonic missile to replace or to complement the Hwasong-7 as a missile more capable of countering missile defense.

The DPRK’s announcement of the successful final test fire of this HGV might also have implications for other hypersonic missile programmes based on the Hwasong-12. The Hwasong-8, which is armed with a seemingly more advanced and wedge-shaped HGV, only reached a top speed of Mach 3 in its flight test on 28 September 2021. [13] Given the apparent success of the relatively simple HGV design tested on 5 and 11 January 2022, it is not immediately clear whether the development of the Hwasong-8 will be pursued further.
ONN will continue to monitor the hypersonic missile development of the DPRK.

Pyongyang, January 12 (KCNA) -- Kim Jong Un, general secretary of the Workers' Party of Korea (WPK) and president of the State Affairs of the Democratic People's Republic of Korea (DPRK), watched the test-fire of hypersonic missile conducted by the Academy of Defence Science on Tuesday.

He was accompanied by Jo Yong Won, member of the Presidium of the Political Bureau and secretary for Organizational Affairs of the WPK Central Committee, vice- directors of the departments concerned of the Party Central Committee and leading officials in the sector of the national defence science.

The respected Comrade Kim Jong Un was briefed on the hypersonic missile weapon system by the president of the Academy of Defence Science before the test-fire.

The test-fire was aimed at the final verification of overall technical specifications of the developed hypersonic weapon system.

Toward daybreak, the Juche weapon representing the power of the DPRK roared to soar into sky, brightening the dawning sky and leaving behind it a column of fire, under the supervision of Kim Jong Un.

After its release from the missile, the hypersonic glide vehicle made glide jump flight from 600 km area before making a 240 km-long turning maneuver from the initial launch azimuth to the target azimuth and hitting the set target in waters 1 000 km away.

The superior maneuverability of the hypersonic glide vehicle was more strikingly verified through the final test-fire.

Kim Jong Un highly appreciated the practical achievements made by the scientists, technicians and officials of the missile research sector and by the Party organizations concerned that brought a great success in the field of developing hypersonic weapon which is of the most important strategic significance in the five core tasks of the five-year plan for building up the national defence capability set forth at the 8th WPK Congress. He gave special thanks on behalf of the Party Central Committee to them.

Stressing the need to further accelerate the efforts to steadily build up the country's strategic military muscle both in quality and quantity and further modernize the army, Kim Jong Un encouraged the national defence scientific research sector to continuously make admirable successes in the historic sacred cause for remarkably increasing the war deterrent of the country, true to the Party's strategic policy of national defence development and strategic guidelines.

That day he called the core members in the sector of hypersonic weapon research and development to the office building of the Party Central Committee and warmly congratulated them. He had a photo session with them, expressing great expectation and conviction that they would help bolster the war deterrent of the country with their continued ultra-modern scientific research achievements for national defence and reliably guarantee the sovereignty and security of the state.

[3] Song Sang-ho, N. Korea's improved ballistic missile traveled at Mach 10: JCS, Yonhap News Agency, 11 January 2022, available at: https://en.yna.co.kr/view/AEN20220111001057325. If flying in a ballistic trajectory, a ballistic missile with a top speed of Mach 10 has a range of less than 2000 km. See: Li Youxiong, 战略弹道导弹 [Strategic Ballistic Missile], p89, PLA Press, Beijing, 1983. However, it is difficult to estimate the maximum range of an HGV due to variations such as its design characteristics and glide profile.

[12] Sufficient thrust is needed for any aircraft to sustain a turn without losing speed and/or altitude. See: Chuan-Tau Edward Lan and Jan Roskam, Airplane Aerodynamics and Performance, p. 607, Design, Analysis and Research Corporation, Lawrence, 2003. However, an HGV is unpowered and will suffer from significant loss in speed and range in performing a turn without compensating thrust. See: Ivan Oelrich, Cool your jets: Some perspective on the hyping of hypersonic weapons, Bulletin of the Atomic Scientists, 1 January 2020, available at: https://thebulletin.org/premium/2020-01/cool-your-jets-some-perspective-....