In the monitoring report on the 50 MWe Reactor at Yongbyon from 9 July 2021, ONN noted that the roof of one of the buildings adjacent to the main reactor hall had been removed.1 The scale of the reported activity appeared to be larger than the previously reported instances in 2018 and 2019. However, the nature of the recent activity remained unclear. ONN subsequently consulted a number of technical and satellite imagery analysis experts in an effort to identify what the recent activity could mean. This analytical report provides an update on the activities at the reactor site and discusses a possible hypothesis explaining the nature of the activity and the purpose of the building in question.

High resolution satellite imagery from Planet dated 23 June 2021 revealed that one of the buildings on the site of the 50 MWe Reactor at the Yongbyon Nuclear Scientific Research Center in the Democratic Peoples’ Republic of Korea (the DPRK or North Korea) appeared to be partially roofless. Since the facility has been abandoned since 1994,2 any new construction activity on the site is of interest.

The first changes to the roof of the building in question can be traced back to some time between 23 February and 8 March 2021, when the first piece of roofing was removed or had fallen from the building (see Figure 1). An object of a size and color matching the now absent part of the roof appeared to be placed in close proximity to the building. As no other signs of construction were spotted on the site of the facility at that time, and given that the site had been abandoned for decades and underwent the only visible maintenance 10 years ago,3 it is reasonable to conclude that the change in the roof was likely to have been the result of damage by strong wind or some other natural cause rather than purposeful dismantlement.

Figure 1. Imagery shows that the first change to the roof happened between 23 February and 8 March 2021. Image © 2021 Planet Labs Inc. All Rights Reserved. Reprinted by permission.

Since the March 2021 change to the roof, the building remained intact, with no significant changes detected until mid-May 2021. Analysis of available high resolution imagery from Planet for the period 13 May to 6 June 2021 indicated that the roof had undergone further modification (see Figure 2). Most likely, the change occurred between 22 and 26 May, as indicated by the 3-meter resolution imagery from Planet. Satellite imagery from 6 June revealed that material removed from the roof had been collected and piled next to the previously removed part, which points to the ongoing dismantlement activity. 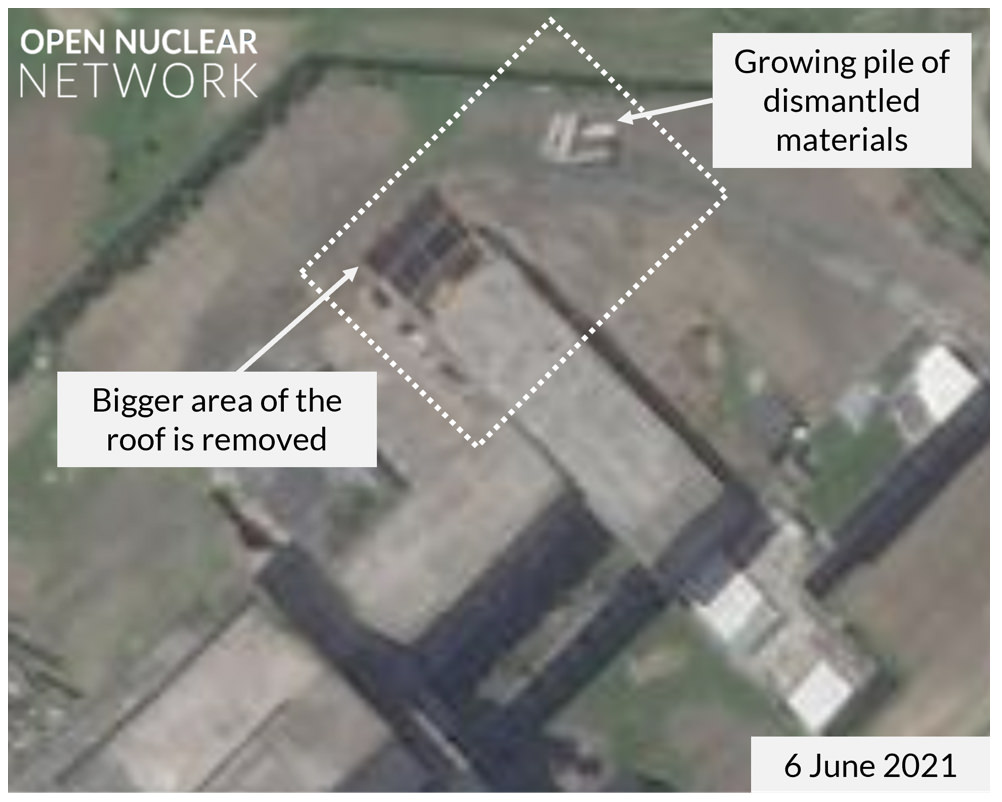 The next significant modification of the roof was seen in Planet imagery from 23 June, as reported in ONN’s previous monitoring report. The size of the uncovered part of the building was approximately 40 x 20 meters, revealing a little over half of the inside layout of the building (see Figure 3).

Figure 3. A close-up of the roofless part of the building with approximate measurements. Image © 2021 Planet Labs Inc. All Rights Reserved. Reprinted by permission.

The latest satellite imagery, from 22 July, shows that activity at the site has continued and progressed considerably. Within one month, the roof was dismantled further and the walls of the building were removed (see Figure 4). 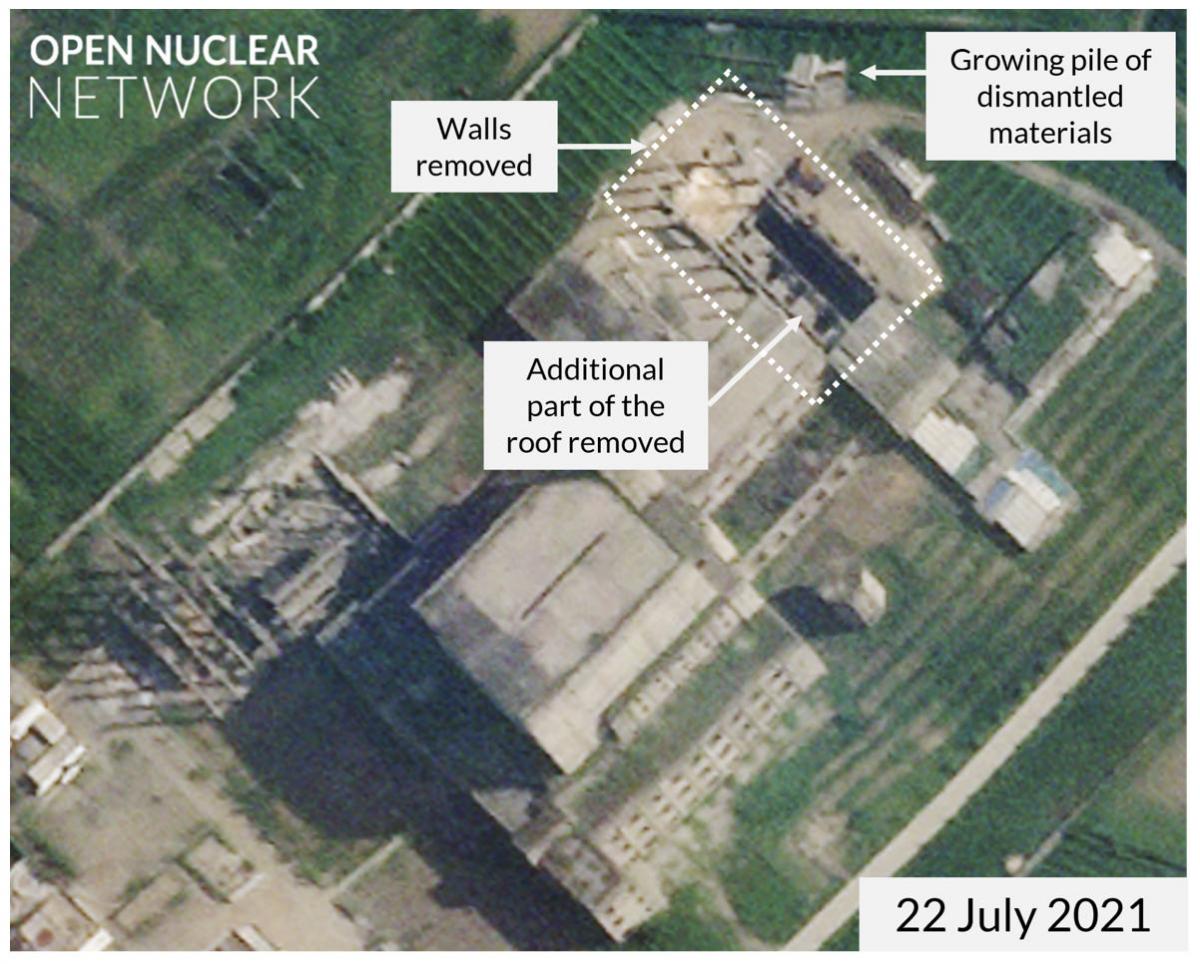 Potential purpose of the building

Most of the experts consulted by ONN agreed that the most likely purpose of the building was to serve as storage for spent fuel. One possible interpretation of the interior layout of the building is presented in Figure 5.

Figure 5. One possible interpretation of the interior layout of the building. Image © 2021 Planet Labs Inc. All Rights Reserved. Reprinted by permission.

While there is no available ground imagery from the inside of the 50 MWe Reactor or co-located buildings, there is CNN footage showing the spent fuel storage hall of the 5 MWe Reactor which is also located in Yongbyon nuclear complex. That footage bears resemblance to the interior of the now partially roofless building ( vertical support columns and windows, pool for wet storage and raised concrete vault for dry storage).4

While some experts interpreted the layout to be suitable for both wet and dry storage of the spent fuel, one nuclear expert who formerly participated in the 1990s Korean Peninsula Energy Development (KEDO) project added a cautionary note that, when designing a reactor, a spent fuel pond (i.e. wet storage) is normally directly connected to the reactor hall. In the satellite imagery, however, the building in question is not directly adjacent to the reactor hall. In his view, it might be more reasonable to assume that the building would be better suited for dry storage of spent fuel.

Possible hypothesis explaining the nature of the activity

The recent changes to the building show clearly that demolition activities have been in progress. The ultimate purpose of these activities still remains unclear.

Although the possibility of a building refurbishment cannot be completely ruled out at this stage, a plausible explanation for these activities is that the DPRK might intend to reuse the materials from the abandoned facility for some other construction or other purposes. Based on the new five-year national economic development plan adopted by the Workers’ Party of Korea in January 2021, the DPRK has been undertaking multiple major construction projects. Taking into account the DPRK’s economic situation due in part to sanctions and recent border closures, resulting in the suspension of trade and scarcity in building materials, the country may need to recycle used construction materials.

As confirmed by Dr. Siegfried Hecker,5 the 50 MWe Reactor was in a dire state back during his visit in 2010:

During one of my visits to Yongbyon, as we passed by the 50 MWe reactor, Director Ri Hong Sop said, "we were so close to having it finished, and now it's turned to rubbish." No question it was not salvageable.6

If the 50 MWe reactor project was truly abandoned, the building would have decayed naturally, which could have triggered the current dismantlement activities. Frank Pabian,7 an expert in satellite imagery analysis, added that the dismantlement could have started due to safety considerations:

Since this site has been decommissioned for almost 30 years, I would believe that age and weather has taken its toll, causing the roof to be unstable and, hence, its removal for safety reasons.8

ONN will continue to monitor the developments on the site.

[2] Implementation of the Agreement between the Agency and the Democratic People’s Republic of Korea for the Application of Safeguards in Connection with the Treaty on the Non-Proliferation of Nuclear Weapons (INFCIRC/403): Report by the Director General to the General Conference, GC(39)/18, 17 August 1995, available at: https://www.iaea.org/sites/default/files/gc/gc39-18_en.pdf

[3] Analysis of historical satellite imagery of the site on Google Earth Pro revealed a change in the covering of the building in question sometime between May 2011 and early 2012.

[5] Siegfried S. Hecker is a professor emeritus in the Department of Management Science and Engineering and a senior fellow emeritus at the Freeman Spogli Institute for International Studies (FSI). From 1986 to 1997, Dr. Hecker served as the Director of the Los Alamos National Laboratory.

[6] The comment was received through private email correspondence between the author and Dr Hecker.

[7] Frank Pabian is a globally recognized expert with over 48 years of experience in the fields of nuclear nonproliferation and satellite imagery intelligence analysis.

[8] The comment was received through private email correspondence between the author and Mr Pabian.